Four Traildogs – Al, Mike, John, and Dan – met  Friday, Jan. 8, 2016, to set two posts for future directional signs where the LOViT crosses Hickory Nut Mountain Road, and then to hike Section 4 east to the trailhead for Section 5 at USFS Road 47A. The goal of the hike was “recon” – to evaluate the shape of the trail segment for any problems that need to be added to the winter maintenance schedule.

After placing the posts, the recon hike was mostly uneventful, which is a Good Thing!  We were able to move three fallen trees off the trail, two of which needed a little prodding from a small hand saw.  Also, we noted a couple of areas that are in need of water bars in order to deflect rainwater off the trail to prevent erosion. And, no recon hike is complete without carrying loppers and shears to clear potential “face slapper” branches, greenbrier, and other undesirable growth along the tread. 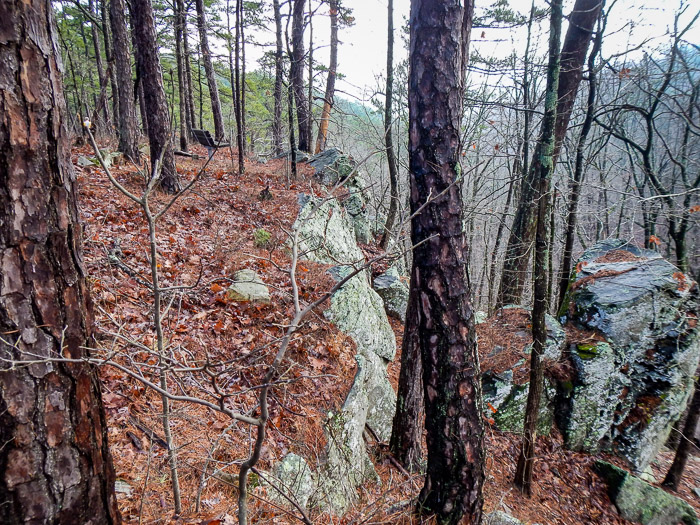 A beautiful overlook from the LOViT just east of Hickory Nut Mountain Road.
(Click on this image to view more photos from the Jan. 8, 2016, recon hike.)

Overall, however, this section of the LOViT was found to be in very good shape, and we all very much enjoyed the hike along the creek that descends from Hickory Nut Mountain.  A stop at “The Grotto” was an added bonus, where we enjoyed a water break and some treats that Al had brought for the occasion.  The stretch of trail along this area is stunning.

More recon hikes are planned for January and February, along with some work days to attack areas that need more than casual maintenance.