On a stormy October 28, 2014, after ten years of planning, designing, and construction, a ribbon-cutting celebration of the completion of the Lake Ouachita Vista Trail was set. The ceremony was held at the U.S. Corps of Engineers Avery Recreation Area at the site below Blakely Mountain Dam.

This ribbon-cutting was to dedicate the final six miles of the trail and the bringing to a close the construction of the forty-five mile mountain biking and hiking trail.

Braving the inclement weather, 100 trail supporters, along with key members of the coalition responsible for the development of the LOViT, gathered for the ceremony. Thanks to the Corps of Engineers the ceremony was set up and held in the Avery Recreation Area’s large pavilion at the eastern terminus of the Trail.

The agenda for the ceremony included:

Jerry Shields opened the ceremony by welcoming all those in attendance, especially in light of the poor weather conditions. Jerry thanked all the coalition members for their continued support over its ten years of development.

Jerry also gave special thanks to the many volunteers, including the LOViT Traildogs, the Arkansas Wildlife Federation, the Friends of the Ouachita Trail (FoOT), the Ouachita Mountain Hikers, and the Boy Scouts for the over 10,000 hours of volunteer time that went into the completion of the trail. 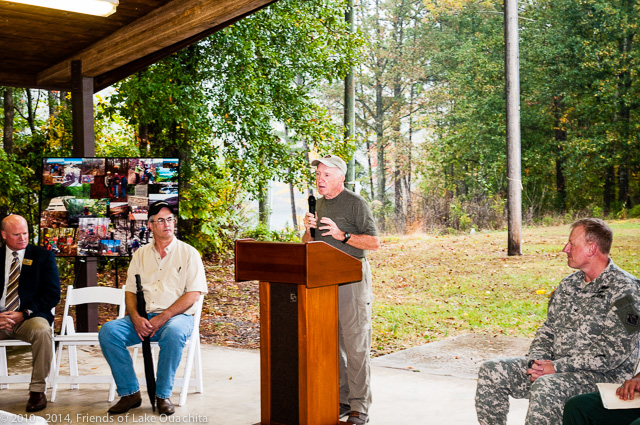 Introductory remarks by Jerry Shields covered the history of the effort to build the LOViT and recognizes the importance of the organizations that participated in the Coalition supporting the Trail’s planning and construction.

The LOViT traverses five mountains and crosses a dozen streams connecting seven existing federal recreation areas. It was a group effort by members of the community for the community.

Colonel John W. Cross congratulated the coalition for its long commitment and determination to complete such a massive project during a time of economic distress. The Colonel singled out the Lake Ouachita Citizens Focus Committee for bringing the project forward as one of their first initiatives in 2003. He also complimented the dedication of the Traildog Volunteers for their unprecedented 10,000 volunteer hours on this project. He closed by stating that this project is a perfect example of federal, state, and local agencies working with private and volunteer organizations to improve their community. 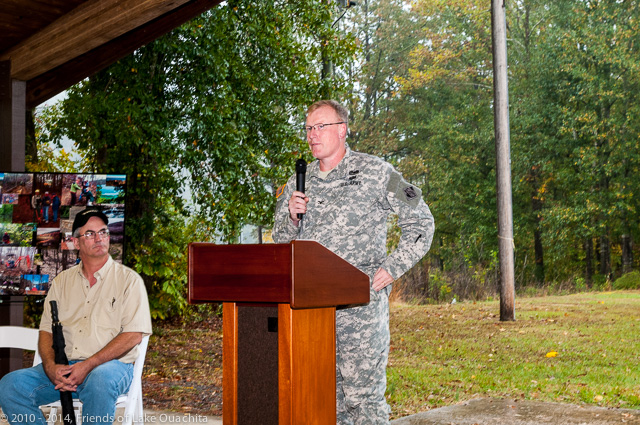 Col. John Cross of the US Army Corps of Engineers recognizes the huge volunteer effort involved in the creation of the LOViT and called attention to the Lake Ouachita Citizens Focus Committee under which the management of the Trail operates.

Norman Wagner, Supervisor of the Ouachita National Forest, spoke of the tenacity of the Traildog volunteers who served as the catalyst in the development of the Trail. He stated that this endeavor resulted in a closer working relationship with the US Forest Service and the US Army Corps of Engineers, both of whom manage all the lands upon which the Trail was built. He stated it is rare to find a volunteer organization that will take on a project of this scope and stay dedicated to it for ten years. Norman closed by giving his thanks for a job well done for all involved. 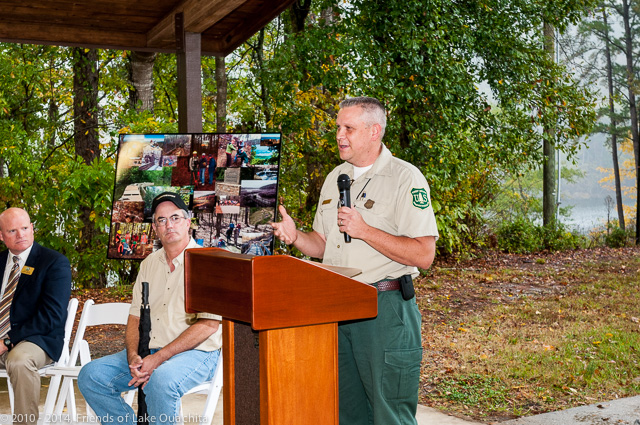 Norm Wagner, Supervisor of the Ouachita National Forest, recognized the Traildogs for their tenacity in this 10-year project and noted the cooperation between the US Forest Service and the Corps of Engineers in their support for the Trail.

Joe David Rice of the Arkansas Parks & Tourism Commission spoke about the rapidly growing popularity of mountain biking and hiking and its impact on tourism in Arkansas. He stated that biking and hiking are the two fastest growing outdoor activities in Arkansas and the country. He further added that pictures and information about the LOViT are now prominently used in the State’s video and written publications. 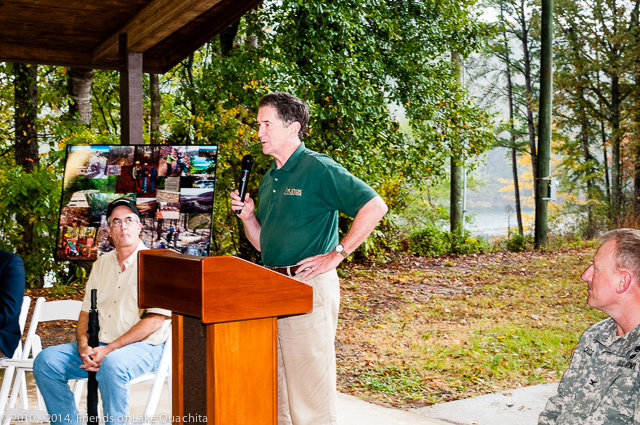 Joe David Rice of the Arkansas Department of Parks & Tourism discussed the growing importance of hiking and biking to tourism in our State and noted that the LOViT is prominently featured in the State’s tourism literature. 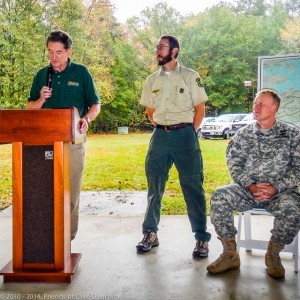 Joe David Rice presents the Arkansas State Trails Council’s award for Trails Professional of the Year to Chris Ham of the US Forest Service. 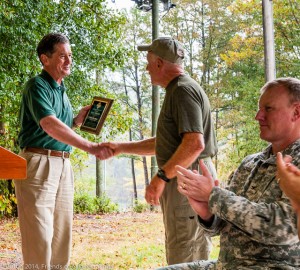 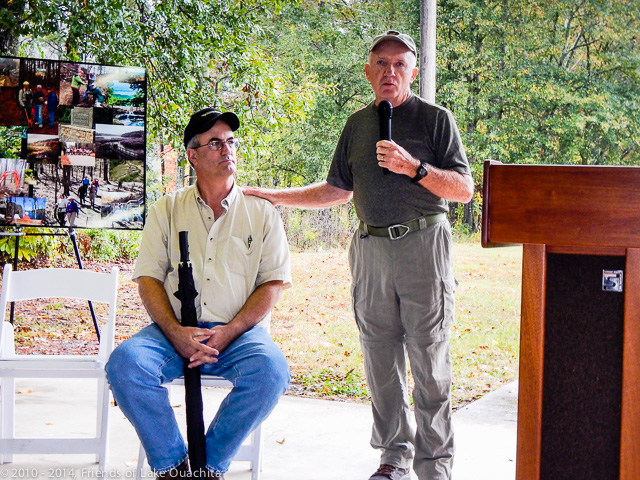 Jerry Shields recognizes Mount Ida, AR, Mayor Alvin Black, who had been a great supporter of the LOViT.

Jeff Crow, Deputy Director Arkansas Game and Fish Commission, spoke of the importance of their watchable Wildlife Trails Program, of which the LOViT was one of the first. Jeff stated the Commission was proud to be a key member of the coalition and praised the Traildog Volunteers and the Corp of Engineers completing the Watchable Wildlife portion of the trail. 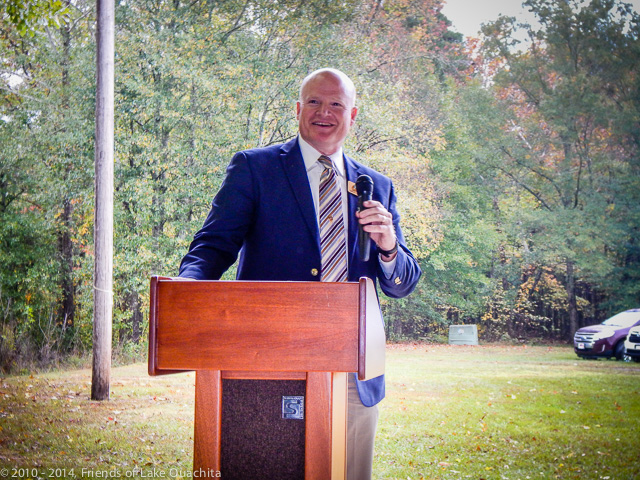 Jeff Crow, Deputy Director of the Arkansas Game and Fish Commission, discussed the importance of the LOViT’s Watchable Wildlife section (the “Americans with Disabilities Act” section), built with help from a Game & Fish and a Corps of Engineers grant.

The final speaker was the Regional Director of the International Mountain Biking Association, or IMBA, Steve Schneider. Steve presented Jerry Shields with a plaque designating the Lake Ouachita Vista Trail as an IMBA Certified “EPIC Trail”. Steve noted that there are only 40 such trails in the world, and the LOViT had certainly earned this distinguished designation. He praised the trail’s Challenge/Reward design for providing great trails experiences, often challenging, but always rewarding for all levels of users. 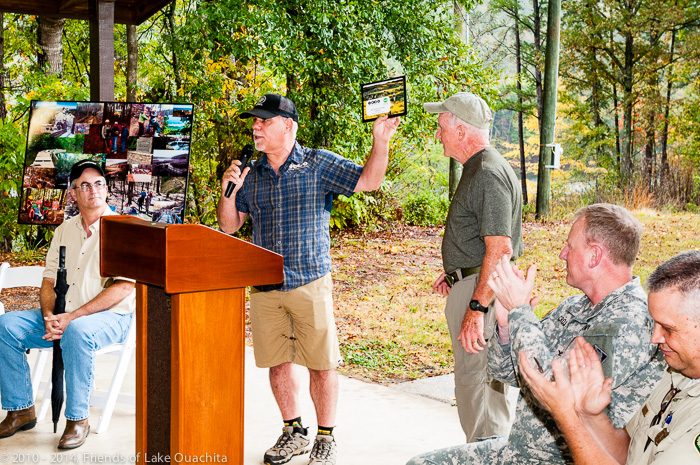 Jerry Shields then called Tom Ledbetter of the US Forest Service forward to offer a special thanks to the man who taught the Traildogs how to properly design and build the LOViT. Tom was instrumental in the layout of a great portion of the trail system and took the lead with the US Forest Service Machine digging crew in its construction. Jerry recognized Tom as a true trail professional who clearly understands what makes a trail great. 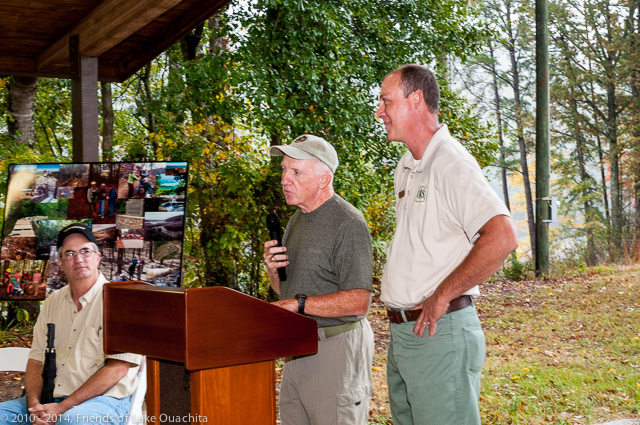 Jerry Shields offers very special recognition to the US Forest Service’s Tom Ledbetter, who has been a great friend of the LOViT, and who has been instrumental in the design and construction of the Trail.

As the crowd gathered to walk to the east portal of the trail for the actual ribbon cutting the clouds lifted and the sun broke out as the ribbon was cut. 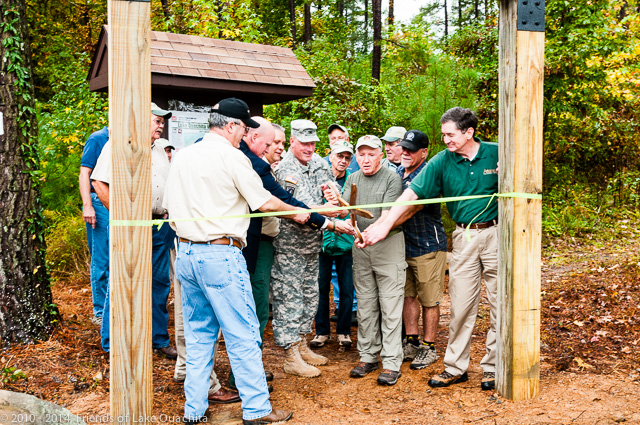 Cutting the ribbon at the LOViT’s Avery Trailhead.

After cutting the ribbon, the volunteers talked of the trail as if it were an old friend they had nurtured to life. They reveled in how it opened the beauty of Lake Ouachita and the lush Ouachita National Forest to users. It was a day to remember for all trail enthusiasts. and especially for trail builders.

(Many more photos from today’s event are available here.)