The fall weather this morning was perfect as Traildogs Robert Cavanaugh and Jerry Shields cleared a dozen trees from across the trail on section three (Joplin to Hickory Nut Mountain) and on the old fire tower spur on top of Hickory Nut Mountain. Most of these trees required chain sawing to remove the blockage. The storms that passed through this area in late August and early September brought down several dead spars that had blocked the third section from being fully utilized by mountain bikers. 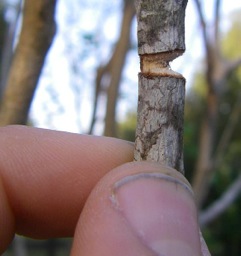 Results of the Twig Girdler on hickory trees

The trail was covered in several places along the trail by small limbs that had been pruned from the hickory trees by a tiny beetle known as a “twig girdler” (Oncideres cingulata). The twig girdler chews the small limbs like a beaver, then drills a hole in the pruned limb and lays its eggs in the limb. See the attached photo of their work. Seems the nut bearing tress, walnuts & pecans, are their favorite victims. These pests do not kill the trees, but they can have a detrimental effect on the nut crop.

We have received approval to proceed with developing a high-water spur on the second section (Tompkins Bend to Joplin) where the trail dips down to lake level. This area of the trail is very prone to flooding from the rising lake waters. The spur is about 150 in length and will require two bridges.