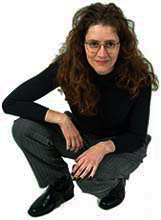 (The following article by Martina Kolm was originally published in the Fall, 2014, edition of “Arkansas Wild” magazine.  It is reproduced here with Martina’s permission.  Martina, thank you for sharing your adventure with us.  For more information about Martina and her web design business, visit her site at http://martinasweb.com.)

With the help of Traildogs and a summer sausage log

During the brutal ride, everyone switched positions. Clinton, my boyfriend, retook his normal lead; I was second, then Mickey. I stopped to wait; a moment to rest and relish the grandeur of this place. We were enjoying a camping/mountain-biking trip on the Lake Ouachita Vista Trail (“LOViT”) near Mt. Ida, Arkansas. The extensive trail system is 25+ miles with 10+ more planned. [Now, a 45 mile IMBA-designated Epic Trail!] 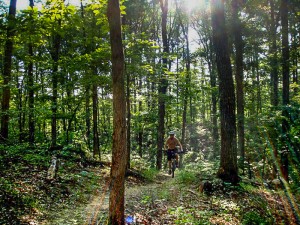 Mickey biking on the LOViT’s Section 3 proceeding east from the Joplin trailhead.

The beautiful mid-day sun poured its light through the canopy, bouncing off white rocks, casting almost no shadow. No traffic heard, only the sounds of nature, an auditory delight.

“Mickey, where are you? Come in”, I said into the walkie-talkie. Nothing. I had a snack.

“Mickey, I’m worried about you. Respond!” Again, nothing.

The biophony was soon drowned out by a guilty noise inside my head. You’re an idiot for thinking someone with three months biking experience could tackle this kind of ride. He’s hit his head and is passed out somewhere. 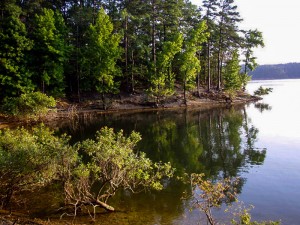 The view from the campsite on Eagle Vista Spur.

I decided not to over-react and be patient. He had great judgment and natural talent. I finally heard Mickey coming up the trail. I ran to him.

“I was so worried. What happened?”

“I was getting sloppy and stopped to rest, ate a last resort backup Gel-shot. I’ve eaten everything else.”

With his walkie-talkie dead, we had to stick together. This was not a problem, as the trail turned into rocky terrain which neither of us could ride. It became a bike haul, as I followed Mickey up Hickory Nut Mountain (a 900 foot elevation gain). The problem was we didn’t know we were climbing a mountain.

On our last full day of riding, we had planned a 9 mile out and back ride from our secluded “Eagle Vista Spur” primitive campsite surrounded mostly by water, a wild and stunning place. 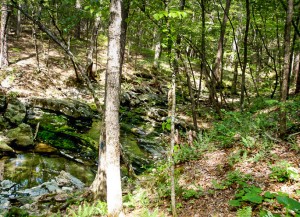 Our destination was Irons Creek Cascades five-step waterfall. The trail passing the falls was easy, so when I saw the “Cascades” sign, the guys had just zoomed by; I assumed all was well. That sign was not an encouragement/directional marker; it was a “Go left a few feet and see the falls” sign.   When the heart is thumping, the adrenaline is pumping, and you are in a “Life List” forest, it’s easy to lose track of not only time, but distance, a lesson soon learned.

With little water, the falls quest was no longer a pleasurable destination but a necessity to stave off dehydration. This was supposed to be Mickey’s first mountain-bike touring trip, a learning experience, and it turned into a nightmarishly-hot hunt for water.

On one of the mountain’s sunny switchbacks, we finally caught up with Clinton sitting on a bench, Mickey joined him. The trail had many scenic benches, thanks to Traildogs, an organization founded in 2005 and dedicated to taking care of and building this fabulous trail (see http://lakeouachitavistatrail.com). Clinton was done and making a compelling case to Mickey about turning back. I didn’t think we had the water to make it all the way back to our last known water source. 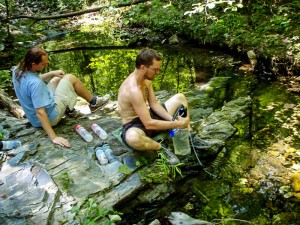 Mickey and Clinton filtering creek water in Irons Creek along the LOViT’s Section 3 from Joplin to Hickory Nut Mountain.

“Seriously” Clinton said, “We don’t know how far up that trail goes or if there’s even water up there”.

“Fine,” I told them, “Stay here and I’ll walk up those rocks and count how many steps it is to water, one, two, three”. I counted as I climbed. After 120 steps the terrain leveled off. Rocks turned to dirt, and I could smell water’s humidity, but I got no official confirmation due to dense trees. I returned with my step count and convinced them to push forward. Water was close.

We ended up at a waterless trailhead parking lot: “Hickory Nut Mountain”. Further exhausted at the realization that we overshot the waterfall by several miles and were on a mountain, we sat at the picnic tables to regroup.

We combined the last of our water and hydration tablets, equaling one bottle, and searched for food. Coming up with virtually nothing, I remembered the sausage log under my bike saddle. We ate every morsel of that log; the salt, fat and wetness of it was devoured by my body, desperate for fuel. It was indescribably delicious. 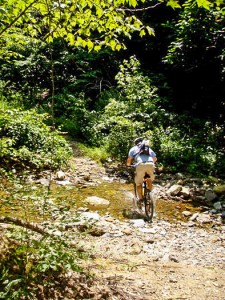 Clinton crossing a creek along the LOViT.

We stood on the picnic table, trying unsuccessfully, to get cell reception so I could call and take Jerry Shields, a Traildog, up on his offer to bail us out if we got into trouble. Jerry had made this trip possible. He answered questions, provided maps, campsite locations, and his number during my trip planning.

From the table, we could see the lake far below. The sailboats were an inch high, and we were like giants, the giants of Hickory Nut Mountain. A mountain we had climbed accidentally but conquered none-the-less.

A van drove up. In my half naked biking getup, I ran toward it like a stinky feral dog, frantically sharing my plight. The elderly couple inside looked toward the back of the van, where the big eyes of a toddler were staring back at me, he and his apparent grandparents, out for a fun day at the park. They were terrified of me, as if I were going to bite them. They gave me a water bottle saying, “This is all we can spare”. The entire transaction felt more like a stickup than anything else.

I ran back with my score. Mickey’s thin six foot frame was draped over the seat of the picnic table, limbs hanging every-which-way from exhaustion (doing his Zen thing). By the time we split the water, the van was gone. I was saddened that, not a bear but, someone like me might have scared them away from the Ouachita National Forest. 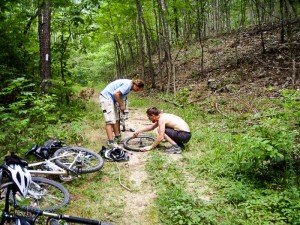 Repairing a flat tire on the way back to camp.

I decided, as a girl, I had the best chance of procuring water from a complete stranger, provided I changed my crazed desperate strategy. I would ride to the main road and flag down passing cars. Clinton and Mickey agreed by just lying there in their own pain and misery.

At the road, a couple drove by with no water, then a car of three. They offered the tea they were drinking. “No, I can’t take that. I’m sure another car will pass by with water, but thanks”.

Just then the couple from before drove back. The man excitedly jumps out of the car proclaiming, “My wife remembered the emergency water bottles in the trunk”. He opens the trunk, “The water’s hot”.

I screamed with delight, “I don’t care, that doesn’t matter. You guys rock! Thank you so much.”

After dividing the emergency water, another Traildog drove up, a runner setting up for a trail run. He was quite impressed with our long ride. Not only did he hook us up with water, but hydration-packs, power-bars, and I got an almond-butter. He was amazing. All these people were amazing and Traildogs in their own right. This whole freakin’ LOViT trail was oozing with generous, caring people and spectacular views. We were on top of the mountain and the world.

The ride back was fun. We had learned where we were going and had everything needed to get there. We checked out the Cascades on Irons Creek, repaired a flat tire, and made it to camp before dark. It was an 11 hour, 17 mile ride. Yes, it was hot and hard, but we learned to LOViT.

Please: it doesn’t matter how you get there, on foot, by boat, bike or accident, the Ouachita National Forest deserves to be on the official “Life List” of places to visit before you die. I guarantee you will LOViT too. 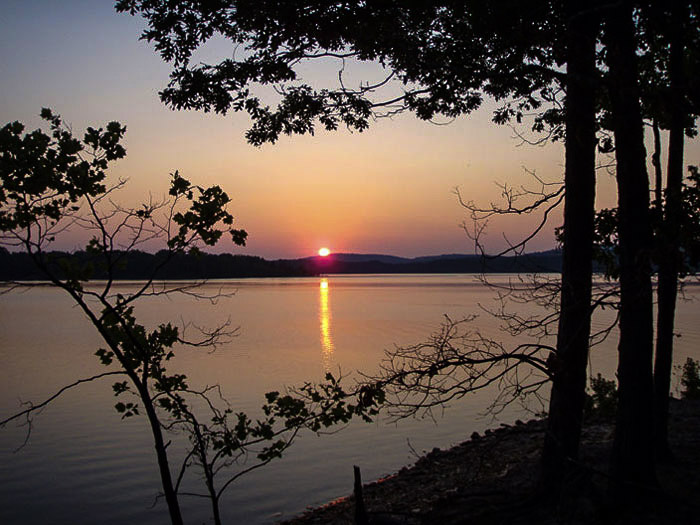