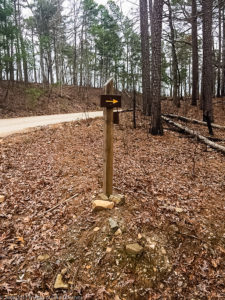 Traildogs Ron Mayfield and Robert Cavanaugh put up 13 trail signs where the trail comes down Hickory Nut Mountain and along the intersections of the LOVIT and FS 47.

Six of the signs were placed on Hickory Nut Mountain.  Four of these were on  two posts where the trail comes down to Hickory Nut Mountain Road (FS Road 50) from the trailhead, and two were placed on a post near the kiosk/trailhead.  Another was placed at the intersection of FS 47A and FS 47.  Four went on bare posts previously placed along FS 47, and one replaced an arrow that was missing.   We put one more near the old pavilion near Crystal Springs.

This should help hikers and bikers stay on the trail.

Robert and Ron also cut 10 or 11 trees off of the short section between the Gap Creek Bridge and Hwy 270. This area had not been cleared in some time.

“It was another nice morning in the woods.”

Thanks Ron and Robert!