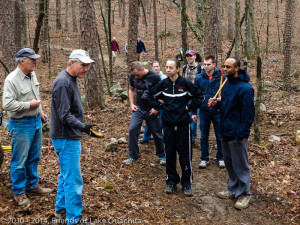 Traildog Al provides instruction to the USAF crew. (Click on this image to see more photos.)

Saturday was a day to remember on the Blakely Mountain section of the Trail, with a gang of Little Rock Air Force Base Volunteers joining the Traildogs for a day of finish work on the newly constructed tread progressing east across the rocky southern face of Blakely Mountain.  The Progressive Trail Design Machine Crew worked through the boulder strewn slope, with the trailing two machines reaching the Rick’s Road crossing, and the lead Sutter Trail Machine reaching the Dam overlook area.

The rain showers that crossed the area Friday night made conditions less than ideal for finish work, but the volunteers persevered and pushed the finish work up to the Rick’s Rd. crossing, catching the two trailing machines by day’s end. 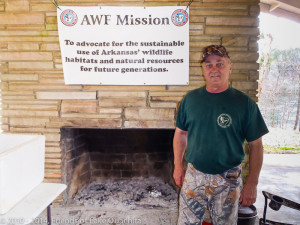 Wayne Shewmake of the Arkansas Wildlife Federation is a great cook. Note the open fireplace and the Dutch oven behind him. With these simple tools he created an outstanding lunch. Thanks Wayne! (Click on this image to see more photos.)

The day was highlighted by the addition of the Arkansas Wildlife Federation’s First Cook, Wayne Shewmake, joining the volunteers, and while the trail volunteers were busy with trail work, Wayne was creating a feast at the Stephens Park Recreation Area fire pit for all the workers, including the machine operators. Wayne had created foil-wrapped packs of roast beast and fowl along with fresh vegetables, then slowly roasted them in the hot coals of the open fire. As the volunteer pack descended upon him, Wayne was ready with piping hot packets of savory, steaming hot food that the Traildogs fell upon, well, like a pack of starving dogs. Young and seasoned volunteers alike ate to the bursting point. Wayne then brought out a huge pan of hot peach cobbler, which brought on a frenzy of renewed feeding. Following this amazing feast, the semi-conscious volunteers were sure they now knew just how a three-day-old dog tick feels after feasting on their favorite pet!

A huge cheer for Wayne, the Arkansas Wildlife Federation, and the Air Force Base volunteers for their time on the trail and the long drive from their homes to join the Traildogs in the final stages of the LOViT construction.  What a great group of dedicated volunteers; our thanks go to out to each one in kind. 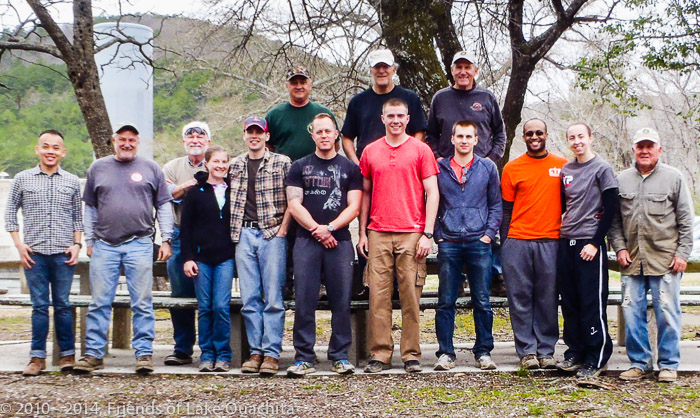 Since the volunteer finish crew has caught up with the trailing machines again we are not planning a scheduled work period this week until we can assess the progress of the machines.