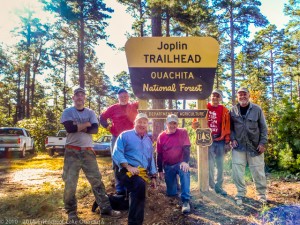 Traildogs Jeremy, Dan, John, Jerry, Chuck, and Robert show off the new Joplin Trailhead sign. Many thanks to the U.S. Forest Service for providing these signs.

Oct. 15 was a beautiful fall day for completing some work on the Trail prior to the planned October 28 at 1:00 pm Dedication Ceremony.  We had six Traildog volunteers today – myself, Robert, Dan, Chuck, John, and Jeremy – all helping install the new Trailhead sign at the Joplin Trailhead parking area.  We also cleared brush and weeds around the parking area and also the section of the Trail heading east where we utilize the old road.

We also cleared the weeds from the Trail where it crosses Mountain Harbor Road. Finally, we checked out the ADA Trail for downed limbs and debris. 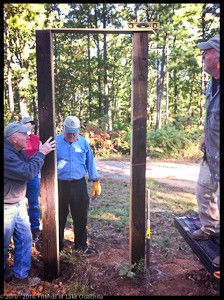 Lining up these tall 6×6 posts for the new trailhead sign IS rocket science, at least for these Traildogs!

It was a good day to be out on the Trail, and it was nice to have Chris Ham and Tom Ledbetter from the USFS join us at the trailhead. 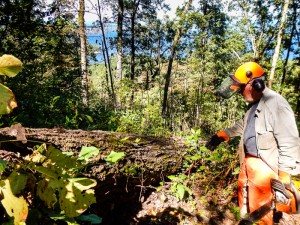 Robert sizing up the tree and planning his cuts. Not a bad view from here!
(Click on this image to view more photos from Oct. 14, 2014)

Yesterday, Oct. 14, Traildogs Robert and Dan covered Section 7 of the LOViT from Brady Mountain Road moving west across Bear Mountain to “Laura’s Bench” just below the switchbacks overlooking Crystal Springs. Many trees were down on the Trail from recent storms accompanied by high winds.

Robert and Dan reported that while they were sitting on the bench at Traildog Vista, taking a break from clearing downed trees from across the Trail, a mature Bald Eagle suddenly came swooping slowly by, right at eye level!  This was their reward for removing those 25 downed trees! 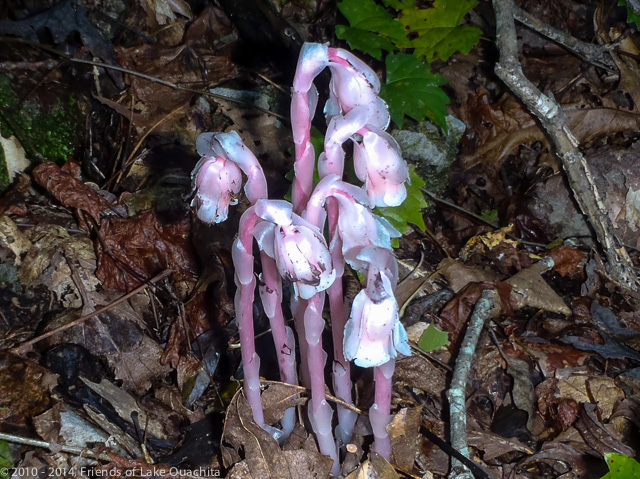 “Indian Pipe” growing on Bear Mountain alongside the Trail. The LOViT is a terrific Trail on which to enjoy many different plants (and often animals).
(Click on this image to view more photos from Oct. 14, 2014.)

We are canceling the planned weed removal day scheduled for next Saturday, October 18, as it will be a busy day for deer hunters in the area, and we don’t want to take any chances on any injuries and don’t want to spoil a hunt.

Four years of storms and neglect were remedied last Friday when six Traildogs spent the day improving Section 5 of the Trail where it parallels and crisscrosses US Forest Service Road 47 between Crystal Springs Road and Hickory Nut Mountain Road. We worked the part of this section from the FS47A trailhead at the eastern base of Hickory Nut Mountain to Pipe Spring, where the LOViT joins the Charlton Trail leading to the Crystal Springs Campground Pavilion.

We sought to improve access and signage at each entrance and exit point along the road. We started at the intersection of FS47 and FS47A, where we installed an assurance directional sign post. The post directs users to follow FS47A 1/4 of mile north to where the Trail turns left and proceeds west to the summit of Hickory Nut Mountain. We also installed a new sign at the FS47A trailhead. We cleared all the undergrowth and removed rye grass planted after the timber harvest of two years ago that had made a weed patch of the trail.

We then began the laborious process of opening each of the entrances to the trail segments along FS47. We also installed a new direction sign post at each entrance. We then hiked and cleared these sections of trail, and they are now ready for use again.

For those of us who built these sections crisscrossing FS47, we remember it as our hardest year of construction. It was a bitter cold winter, and when it wasn’t just cold, it was cold and wet. So, we would like to see more regular use of these three nice sections and keep our riders and hikers off the road as much as possible.

The photos show the new trail directional signs we are installing along the entire length of the trail to improve assurances to all users that they are on the right track. 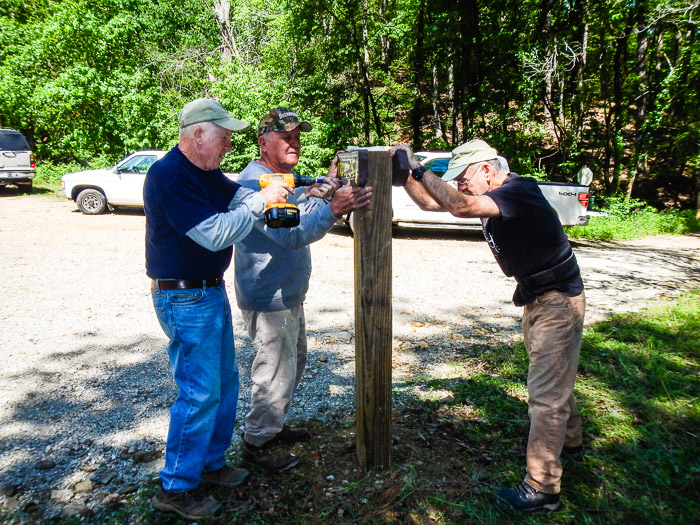 Pack a trail lunch and join us.

The prescribed burn took place on Monday, March 31, on very short notice.  We did get a note out via Facebook, but we didn’t get notified in time to get a website update out ahead of the event.  The USFS was very careful with respect to placing notices at the trailheads, and they covered the length of the Trail to make sure nobody was on Little Bear or Bear Mountains at the time of the burn.

The United States Forest Service (USFS) is planning a prescribed burn on both Bear Mountain and Little Bear Mountain in early April, 2014.  The burn will cover some 5500+ acres from Crystal Springs to Brady Mountain.  The Forest Service will post signs warning potential hikers of the event, and it is most important that you do not enter this area prior to the prescribed burn event.

The prescribed burn will take place on a weekday in order to minimize any inconvenience to hikers and boaters on Lake Ouachita.

The map below, provided by the USFS, details the proposed burn area.  Note that the legend at the top center of the map does not refer to the map’s grid numbers.  The burn areas are those outlined in red.  Click on the map image below for a full-sized version (about 2 MB). 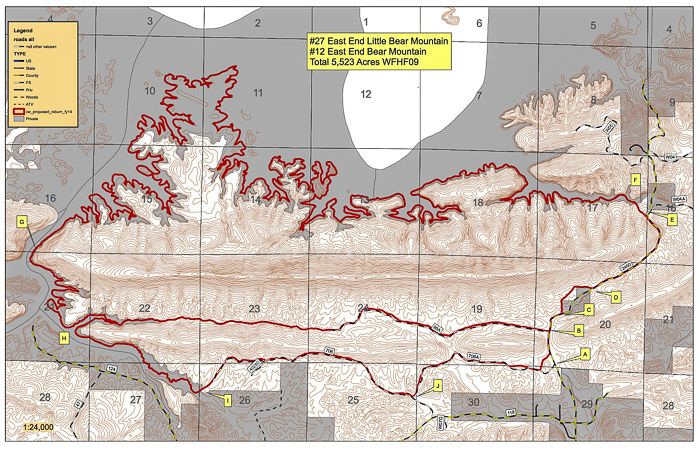 USFS prescribed burn of Little Bear and Bear Mountains in early April, 2014.
(Click on this image to download a full-sized PDF image of the burn area._

This article will be updated as more information is known, and we will update the LOViT Facebook page with this information too. 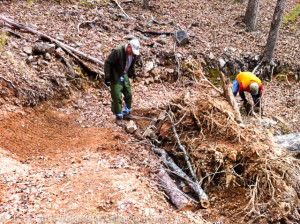 The first of several fallen trees that had taken out part (or all) of the Trail. Lots of carrying rock and other filler to make the Trail whole again.

The snow and ice had caused significant damage to this section. We removed 35-40 trees that had fallen across the trail, taken down by a combination of the ice, snow and wind.  We had to tackle five large trees that had collapsed with their root balls completely obliterating the trail tread, leaving gapping holes where trail once had been found.  We spent hours hauling rocks and dirt to fill these holes to create a passable tread again. 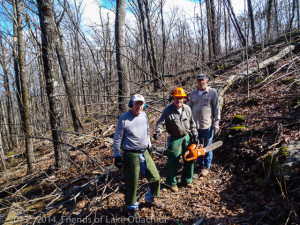 Just one of many, many, downed trees on the mountain.

We also spent a great deal of time removing innumerable branches and bushes brought down on the trail by snow and ice.  We trimmed all the overhanging limbs and removed hundreds of rock and boulders from the tread to improve footing for hikers, bikers and next week’s Run LOViT 100K runners.

The Day started gray and cool, and by the time we reached Little Bear Creek at the base of Big Bear Mountain, it was raining lightly. After we finally reached the summit of Bear Mountain, the sun broke out, and it warmed up nicely until about 2:00 pm, when the wind abruptly changed from a light southernly breeze to a very strong wind directly from the north. Giant old growth hardwoods swayed and creaked in the wind and at one point a large tree crashed down across the Trail about ten yards in front of our team. We kept a sharp lookout after that event for any possible widow-maker limbs and trees falling from the wind. 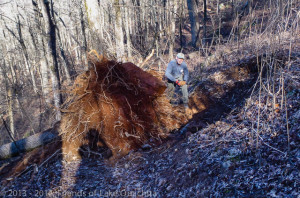 One more giant hole to fill in. This was the worst one of the day.

The views of the lake today were breathtaking. Bright sun highlighting the deep blue waters white capping in the wind was eye candy for the team. This time of year is the prime time for hiking or biking this section that offers seven miles of unobstructed views of the lake with its emerald green islands surrounded by their pearly white shores. We had lunch at the western-most trail bench, enjoying the view and the great brownies that our famous Traildog cook, Linda Berger, had baked and sent to the the Alpha Dog to share with the team, who fell on them like, well … a pack of starving dogs.

It was a great day to be on the trail, but at the end of the day we were Traildog tired but very satisfied we had won the battle of Bear Mountain. 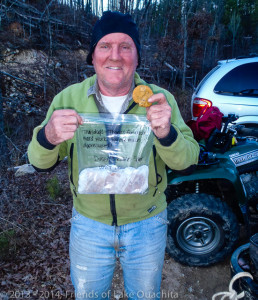 At the end of the day, Robert said he was crying “like a wounded panther” and whimpering “I want my Momma!” But the cookies left for us by Rachel and Dustin Speer, organizers for the RunLOViT event to be held Feb. 22, 2014, brought the smiles back.

We also had another two-man team continuing the the finish work on the new Section 8 now under construction, which we really appreciated. We  will be back on the new construction next week on Tuesday, Wednesday, Friday and Saturday.

We took notice of the newly installed mile permanent markers being installed the entire length of the trail by the US Corps of Engineers.

When we returned to our vehicles at the end of the day, the good folks sponsoring the 100K race had left our team a very tasty batch of homemade cookies. What a nice surprise. Thanks, Dustin and Rachel. 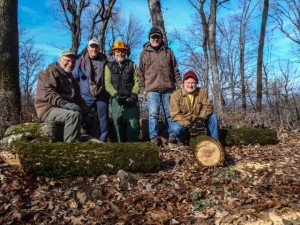 Traildogs are a hardy bunch, even when it is cold. Today, five of the Traildogs cleared 25 downed trees between Crystal Springs Road and Brady Mountain Road. The recent snow and ice storms had taken their toll, and they always either fall across the trail or on the trail.  Most of the downed tress were on the north face of Big Bear Mountain. It was a balmy 25 degrees as we set on this ten mile stretch of mountainous trail. Patches of ice and a little snow were still evident on Little Bear Mountain, but big Bear Mountain was another story. 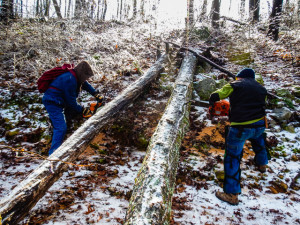 Al and Robert tackle a pair of trees that had fallen across the Trail. Lots of ice!

As we reached the summit on the north side of the mountain, the trees and shrubs were completely covered in sparkling diamonds. The bright sunlight shining through a forest of ice was a sight to savor. The Trail itself was coated in leaves snow and ice but was manageable as we worked our way east.  Traildog Vista was coated in ice, and the view of the lake shrouded in a grey icy fog was beautiful. As we moved down the Trail, we were showered with falling ice that sounded like broken glass as it broke free of the old growth hardwoods towering high above us. At the end of the day, we had successfully cleared ten miles of the trail, and with the winter leaf-off, the views of Lake Ouachita from the north slope of Bear Mountain were at their best.

Just a reminder:  The LOViT Marathon is scheduled for December 21st.  We are seeking volunteers to assist at the aid stations.  If you feel you can volunteer, please let us know so we can schedule assignments. The aid stations will be closed around noon.

Construction plans for the eighth and final section of the LOViT are coming together. We have selected a contractor and expect to begin construction around the first of February. This final section is approximately six miles in length, starting at Brady Mountain Road and moving east to the base of Blakely Mountain Dam.  We are still awaiting the final “Order to Proceed” from the Arkansas Highway Department’s Grant administrator, but we expect to receive this approval in the next few days. We will keep you posted as the construction schedule firms up.