The two bench plaques were donated in honor of Diann Gathright’s dad and her uncle. The benches are side-by-side on the fishing pier part of the raised walkway. It is appropriate to have the brothers together near the lake they loved.  Here’s their story as told by Diann’s sister, Pam Howell:

The Boys of the Lake

If people didn’t know better, they would have sworn they were twins.

They looked alike, talked alike, laughed alike, and possessed a kinship beyond being older and younger brother (one of two). They were friends.

Their friendship was fostered – as anyone who had the good fortune to hear their boyhood stories – through a series of adventures and misadventures while growing up in North Louisiana and South Texas, the kind that Tom Sawyer and Huckleberry Finn would find a competition for fun and mischief. 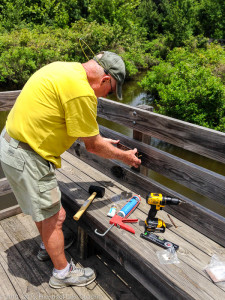 But what they had in common – love of God, of family, of country – was just the embroidery sewn on the fabric on this brotherhood/friendship. What really united them, what they talked about beyond their kids and grandkids, was The Lake and fishing, Fishing and the Lake.

Dorsey Howell lived most of his life in Arvada (Denver), Colorado, and Earnest Howell lived most of his life never ten minutes from a watering hole in Arkansas that could hold a boat, a man with a fishing pole, and the love of the sport, solitude when allowed , companionship when given. But where they loved to meet beyond any other place was Lake Ouachita, enjoy the hospitality of Al and Diann Gathright (elder daughter of Earnest) but, moreover, The Lake itself. 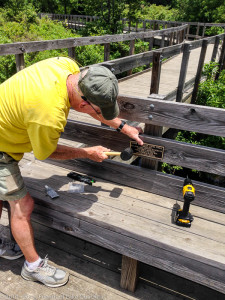 “Alpha” Traildog Jerry installing the plaque dedicated to Dorsey Howell on a bench adjacent to that dedicated to his brother, Earnest.

In younger years, they enjoyed “roughing it” in tents, on picnic tables, and fold-out chairs along the shores near Little Fir or Joplin, where they launched tents, boats, children to the water with Ivory soap, and heated cast iron pots for the daily or weekly catch, depending on the skill (or luck) of the lines and the rods and reels. Once older, and not as mobile (Earnest “handicapped” all of his life from an industrial accident in his late twenties, and Dorsey, slower moving, from a couple of knee replacements as a result of the daily hazards of his occupation, and Tom, younger, yet equally as involved in the stories), the three brothers still met at the Gathrights to go to The Lake, even if it meant launching from the pier rather than from the rocky shores of their favorite camping areas.

Even on the rare occasion they couldn’t even do that, they were still happy to meet at The Lake, send the others out to the day’s catch, launching them with the wisdom they had accumulated through the years about the art of fishing (“Just do it!”), and await their return for the rounds of tall tales, shared laughter, and a communion known only between fishermen but enjoyed by all.

But on the memorial benches from family and friends and all who love and miss them that bear their names, and the bench to Dorsey Howell given from the youngest of the brothers, Tom, who still comes to the Lake to fish, rest, and visit his older two brothers on this special place, are where the two older brothers have reunited in spirit, welcoming all to come out on the handicap ramp and deck (built by the Traildogs) to get as close to The Lake as they can and sit a spell.

And on some days, in the quiet of the evening, as dusk falls, those who knew them can hear their words and laughter, see their eyes sparkle, and feel the kinship of love of The Lake – and each other – Earnest and Dorsey will forever share.