Tom Ferguson, one of the first U.S. Forest Service Rangers who worked with the nascent Traildogs during the first years of the Lake Ouachita Vista Trail design and construction, could not be with the Traildog team when the Forest Service presented the Traildogs with their 2012 Volunteer Organization of the Year Award.  However, Tom met with Traildog Mike Curran for dinner on March 6, 2014.  In Mike’s words:

“I had a wonderful visit and dinner with Tom and Sandra Ferguson last night. Tom is one of the original Traildogs, now living in Rodgers, Arkansas. I had the opportunity and pleasure to present Tom with the Regional Foresters award for his participation as a volunteer Traildog building the Lake Ouachita Vista Trail.” 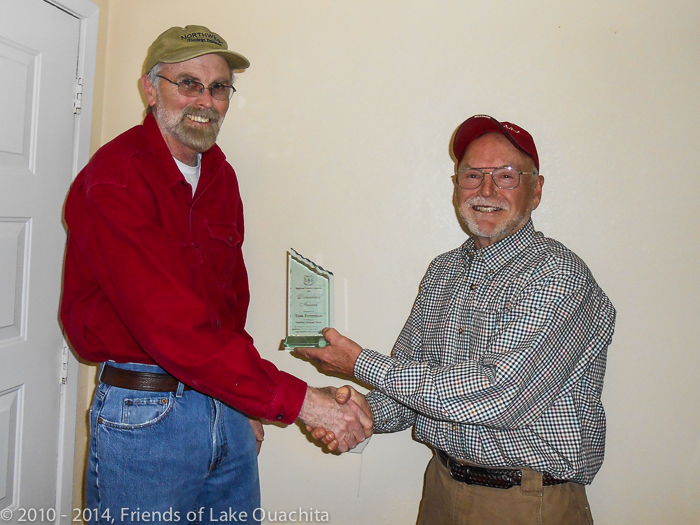 “Tom was one the first rangers we worked with in the first years of the LOViT. It used to be a joke about me trying to keep up with Tom, Al, Tim Oousterhous, and Tom Ledbetter when we were laying out the first legs of the trail – all of these guys were long of leg and could walk you into the forest floor, and I had to learn to walk twice as fast. Tom was one of those quiet ones who was a vast reservoir of trail building knowledge. He was also the one who loaned Al Gathright and me books about the early days of the Forest Service and the great fires of the early 19th century. He introduced us to the man who designed the Pulaski, named after himself, and who was the Forest Service’s first real hero.

“Tom is good guy who taught us how to build trails properly. I am glad I had the opportunity to work with him.”

Thank you, Tom, for your work on the LOViT from all of us who came along later.