Local Traildog volunteers gathered near Denby Bay of Lake Ouachita the week of January 14, 2019, to repair the planking on the trail bridge over the Gap Creek part of the ADA (Americans with Disabilities Act of 1990) Watchable Wildlife handicap accessible portion of the 45-mile-long LOViT trail system. 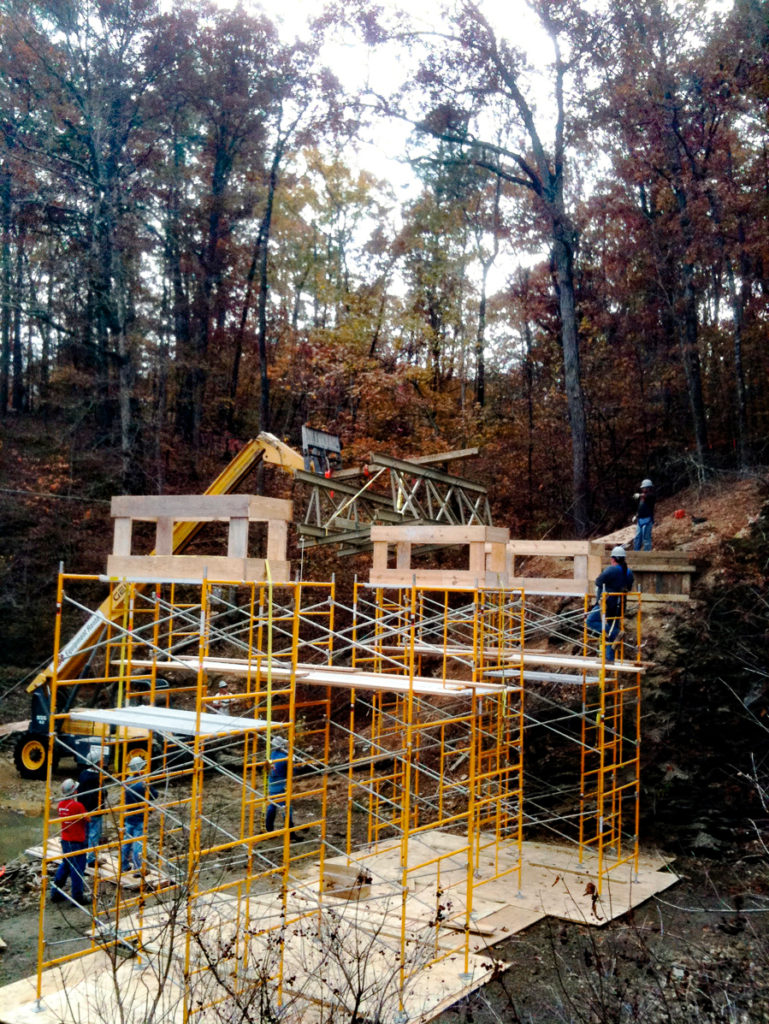 Scaffolding built by the U.S. Army Corps of Engineers during the construction of the Gap Creek Bridge.
(Click on this image to view more photos of the re-planking project.)

The Gap Creek Bridge was originally constructed by a trail coalition team in 2010, lead by the US Corps of Engineers, and supported by the Traildog volunteers, with funding through a grant from the Arkansas Game & Fish Commission.

The thirty-foot-long pedestrian bridge is a low maintenance structure made of structural fiber and wooden planking. It rises almost twenty feet above the creek bed and is above the Lake Ouachita’s high water mark.

Once the abutments were completed, the summer low-level of the creek was diverted to allow construction of a plywood base across the creek bed to support the scaffolding necessary for the frame assembly.

The $30,000 bridge kit was shipped to the site where it was assembled into three ten-foot sections near the bridge abutments. A portable crane was brought in to lift the three sections onto the scaffolding, guided by ground crews who initially attached each end section to the abutments.

The tricky part was the middle section that had to be eased between the two end sections and placed where the connecting braces and bolts would line up in the predrilled holes. Workmen on the top of the scaffolding guided the dangling section into place and assembled the twenty-four large bolts, creating the thirty-foot frame. 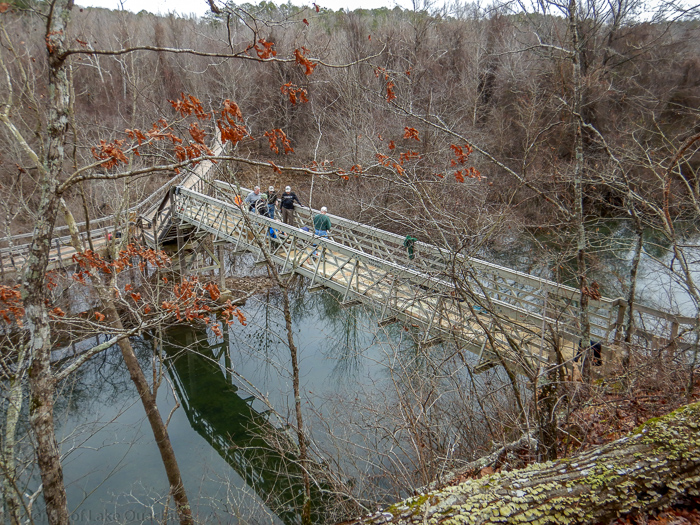 Finishing up the re-planking effort for the Gap Creek Bridge.

The sixty, three-inch-thick, one-foot-wide, and six-foot-long planks were bolted into place. and in a matter of two weeks, the Gap Creek Bridge became a reality.

Eight years later Traildog volunteers performing the annual inspections of needed maintenance discovered the eight-year-old planking was failing. They contacted the Corps lake management team and suggested, if the Corps would furnish the materials, the Traildogs would remove the deteriorating planks and install the replacements.

The Corps of Engineers agreed to furnish the replacement planks, hardware and any necessary specialty tools required for the refurbishment of the bridge.

Thirteen local Traildog volunteers participated in the bridge refurbishment over a four-day period. It was a difficult task, not having scaffolding to stand on underneath the bridge due to the high level of the lake backing up into the creek. 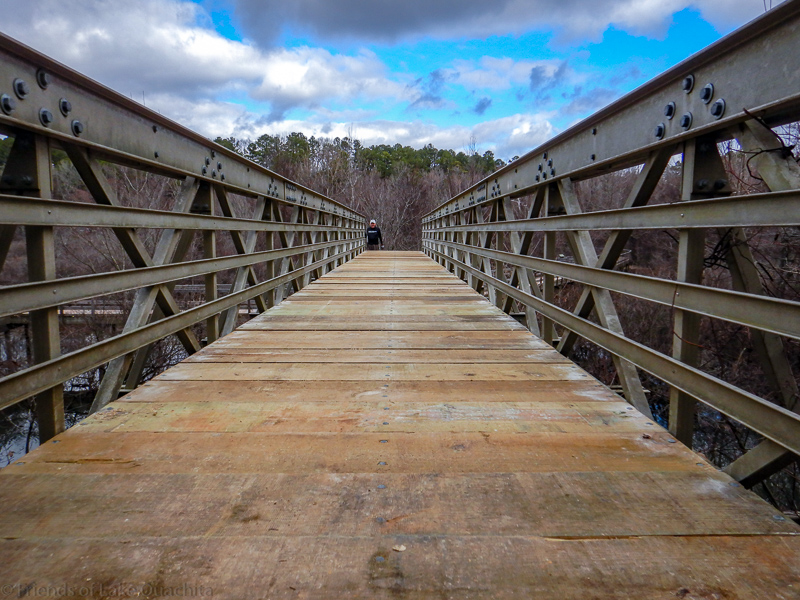 The finished job! Everyone, enjoy this beautiful spot!

The 200-pound planks had to be transported the full length of the connecting 900-foot elevated walkway and up the two sets of stairs to be installed. Two five man teams worked from both ends of the bridge for two days to complete the refurbishment. Only one tool was lost to the waters, along with a handful of bolts and washers.

A VERY BIG THANK YOU to the U.S. Army Corps of Engineers for their support and the hard work of the Traildog volunteers for a Job Well Done!

(Click HERE for more photos of the re-planking project.)