We would like to remind everyone that modern gun deer season opens on November 9, 2019, and continues through December 1 in the Ouachita National Forest along the LOViT. Dogs are allowed to be used hunting for deer during this time. A second modern gun season is December 26-28. Note also these deer hunting dates: Archery - Sept. 28, 2019, through Feb. 29, 2020; Muzzleloader - Oct. 19-27 and Dec. 14-16; Youth modern gun hunt - Nov. 2-3, 2019, and Jan. 4-5, 2020. Be especially careful and be sure to wear orange if you decide to hike or bike on the Trail during these times. We don't want anyone to get hurt or to cause conflicts between Trail users and hunters.

Fifteen years ago, the idea of a hiking and biking trail along the southern shore of Lake Ouachita was born.  Support from both land mangers of the proposed route – the US forest Service and the US Army Corps of Engineers – was sought and received by a small band of local trail enthusiasts who later became the Traildog Volunteers.

A plan was developed to construct a trail from the Denby Bay area of the lake to the Blakely Mountain Dam Avery Recreation Area forty-five miles to the east.  The US Forest Service agreed to take the lead in the training of volunteers in trail design, construction and long term maintenance.

Some ten years later and over a million dollars of grants, in-kind labor and donations, the Lake Ouachita Vista Trail, or as it known today, The LOViT, became a reality. 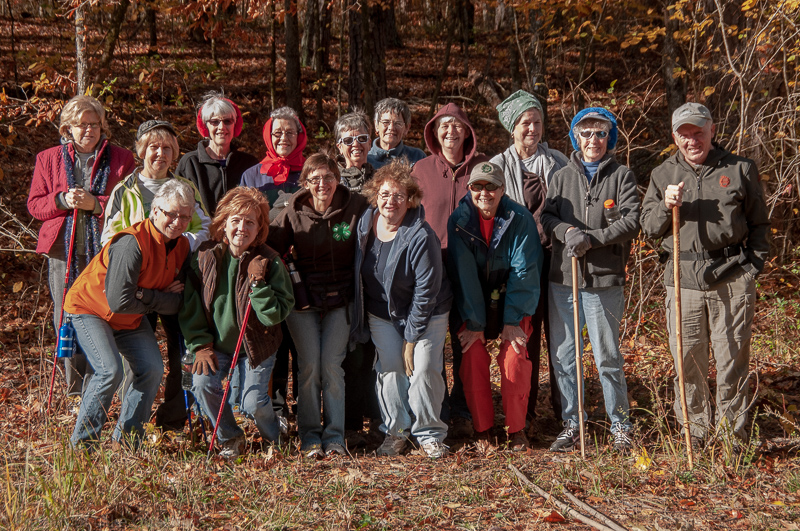 Tens of thousands of hours of planning and construction led to a professionally designed and constructed trail to fit all levels of trail users, including a special section for those with restrictive health issues.

The Trail’s design focused upon opening up long-hidden areas of nature along the southern shoreline of Lake Ouachita.  Once design and construction began, the dig teams would locate historical and unique natural areas that heretofore had been inaccessible to the general public.

Long abandoned early homestead sites were found quietly returning to nature.  A moss covered pile of native stone from a collapsed chimney or a leaf-filled, rock-lined pit that was once a root cellar told the story that a forgotten family once lived here.

Even an occasional long-abandoned site of an abolition era bootlegger’s forest kitchen for high spirits complete with rusted barrels and lots of empty glass jugs were found coated in velvet moss and camouflaged under layers of leaves.

The most impressive finds were those of nature’s own beauty.  Such sights as an old crystal pit lined with wild Irises and fiddlehead ferns, and something as simple as a mossy rock-lined pool with a cold spring bleeding cool, clear water into an unnamed stream were discovered.

The diggers would spot a nearby giant Mountain Ash tree holding court over the deep valley through which they were taking the trail and wonder if anyone else would notice.  The volunteers looked for a path through a stand of virgin, three hundred year-old Short Leaf Pines gracing a steep hillside littered with Montgomery County’s unofficial “County Mineral,” white quartz.

Early spring was an especially uplifting time when creating a spur trail over a hillside covered in the white faces of thousands of blooming dogwoods to a vista where bald eagles are known to roost.

Construction was a special challenge for the dig crews, who each day kept clawing their way up the backside of Hickory Nut Mountain to the highest point above the lake’s surface. Each day during construction on the mountain, right after lunch, the crews would stop and listen for the distant hoots of an owl deep within the valley below.

The LOViT has many easy access points for a hike or a bike ride along its winding route.  The Trail has been carefully marked, so even unskilled users can find their way through the forest.

Beginning this spring, the Montgomery County Health Education Advisory Board and the Traildog Volunteers are sponsoring opportunities to experience the beauty of the Trail.

The Traildogs will serve as the guides for these hikes, utilizing their experience on the Trail to point out unique plants, rock formations and other natural points of interest, as well as any of the historical sites.

The first of these guided hikes will be on Friday, April 6, 2018.  This hike will be an approximately one to two hour loop trek that will return to your starting point.  A good pair of walking shoes or boots, some water and possibly a walking stick are all that’s needed, other than the will to join in.

The group will meet at the parking area of the Joplin Methodist Church just off Mountain Harbor Road and will depart at 9:00.  This will be an opportunity to walk under three hundred year old pines, see hillsides of blooming wild Iris and banks of emerging fiddlehead ferns, and of course, the Dogwood bloom.  The alternate date if rained out will be Friday 13, 2018.

No reservations are necessary, but if you have questions, the Traildogs can be reached by email:  lovit.traildog@gmail.com