Saturday, October 25th, the Ouachita Mountain Hikers had a rally and BBQ at the Avery Recreation Area to celebrate the completion of their six-day hike of the entire Lake Ouachita Vista Trail system. Starting at the ADA Kiosk on Monday Oct 20th, various groups of OMH members hiked sections of the Trail. Eight of the members, including Traildog Chuck Dumas, received special recognition for hiking the entire forty miles of trail.  This was a team effort of the Ouachita Mountain Hikers organization, with some members hiking, some shuttling, and some organizing the Rally and BBQ. 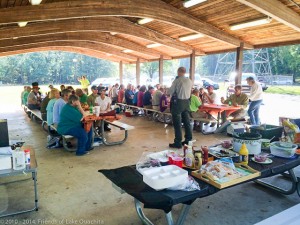 The Ouachita Mountain Hikers invited the LOViT Traildogs to join in the hikes and to join them in their celebration rally and BBQ. Pam Harrison served as head chef and food organizer, and it was indeed a feast! Three of our Traildogs – myself, Robert Cavanaugh and Chuck Dumas – were present at the rally and BBQ. After the group of around fifty finished eating, Mike Wade, US Army Corps of Engineers Ranger, gave the group a presentation covering the recently completed emergency rescue plan he has developed for the Trail. Mike, as usual, did a great job of explaining this well-thought-out emergency plan.

After Mike’s presentation, special awards were presented by Cliff Harrison to the eight members who completed a hike of the entire Trail. Following these awards, Jim Gifford presented a special Certificate of Appreciation to the Traildogs for their efforts in creating this beautiful trail system.

It was a fun day, and we were humbled by the special thanks and recognition from the Ouachita Mountain Hikers.

To my knowledge this is the first organization to hike the entire trail in less than a week.

Many thanks to the Ouachita Mountain Hikers.